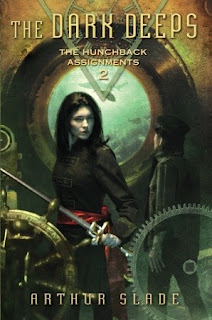 Synopsis from Goodreads:
A fantastic Steampunk adventure in the deeps

Transforming his appearance and stealing secret documents from the French is all in a day’s work for fourteen-year-old Modo, a British secret agent. But his latest mission—to uncover the underwater mystery of something called the Ictíneo—seems impossible. There are rumors of a sea monster and a fish as big as a ship. French spies are after it, and Mr. Socrates, Modo’s master, wants to find it first. Modo and his fellow secret agent, Octavia, begin their mission in New York City, then take a steamship across the North Atlantic. During the voyage, Modo uncovers an astounding secret.

The Dark Deeps, the second book in Arthur Slade’s Hunchback Assignments series, is set in a fascinating Steampunk Victorian world. Modo’s underwater adventures and his encounters with the young French spy Colette Brunet, the fearless Captain Monturiol, and the dreaded Clockwork Guild guarantee a gripping read filled with danger, suspense, and brilliant inventions.

This is a great series for kids - it has so much they will enjoy. There's interesting characters, mystery, adventure, cool steampunk ships...

Modo's mission this time was to find out about a mysterious underwater sea monster called Icitneo. It turns out that Icitneo is actually an ingenious submarine ship built by Captain Monturiol with an amazing mission. However, the devious Clockwork Guild is also after the ship.


I was happy to see Modo back again. He is such a loveable character in his innocence, emotional vulnerability, and strength. He is an exceedingly ugly hunchbacked character around the age of fourteen who can change his appearance at will and who has been trained as a British secret agent.


Modo is partnered up with Octavia, another great character. She is self reliant, feisty, and able to take care of herself.

Slade is a great story teller with a wonderful imagination. Some of the ideas and evil plans in this book were ingenious. I also love how he pulls on the reader's heart strings, especially where Modo is concerned, making him the most human character of them all.

I think kids will really enjoy this series and the stories of perilous adventures will keep them turning the pages.