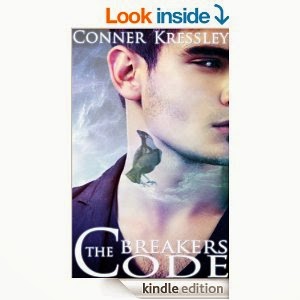 
SUMMARY
Where were you when the world ended?

Three weeks shy of her seventeenth birthday, Cresta Karr wakes to find her world is falling apart. The necklace her father left her is mysteriously missing, a black sedan is stalking her and her friends, and her house is minutes away from exploding. To top it off, she finds out that Owen, the enigmatic, if slightly off-kilter guy of her dreams, is both not interested in going out with her and a superspy sent by a clandestine organization to keep tabs on her.

Turns out Cresta is the subject of a 500 year old prophecy, and if Owen and the other “Breakers” can't find a way to circumvent the future before the sun comes up on her birthday, Cresta is destined to bring about the end of the world -- something she'd rather not have on her college applications. That is, of course, if the gun-toting cult members piling onto her front porch don't get to her first.

The countdown is on. Secrets will be revealed, relationships will be tested, prophecies will be fulfilled, and fate will fight free will in a battle so intense that it won't end until the world itself does.

REVIEW
I bought this book as part of a larger box set collection, but am reviewing each book individually.

Cresta lives in a small town and is frustrated from having to move there from Chicago after her father died. She has two friends, Casper and Owen. As it turns out, Cresta is part of a larger prophesy, as well as an ancient and paranormal sect in society.

I had some issues with this book, the first of which was the editing. There were many typing mistakes, and while I don't want to sound picky, these pull the reader out of the story and really are a big deal. I can forgive a few, but this book was riddled with them.

The concept of the book was fun and I like the themes about fate versus free will, and it was this that kept me reading. However, I wanted Cresta to be a bit stronger in the end. Maybe she will get there in the next books. I felt like she was floundering around and being fed a lot of solutions at times. The romance between her and Owen was fine, if forced at times.

Simon, her non paranormal friend, was probably my favourite character. I liked how goofy and loyal he was, kind of like a big puppy.

I am always sensitive when there are adoption issues in a book, and the one's in Breaker's Code were actually handled fairly well. It showed people being insensitive, which they can be, but ultimately, Cresta's parents are her parents, the one's who raised her. I hope that doesn't change in the next book.

This could be the beginning of an interesting series, but I hope the author gets some help with the editing. The book is pretty fast paced and I like how it began, talking about it being two days before Cresta's house blew up, then the day before, then the day of.
Posted by Unknown at 10:18