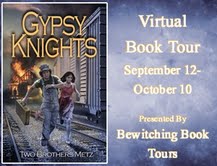 Today is my stop for the Gypsy Knights by Two Brothers Metz book tour.  This book tour has been set up by Roxanne Rhodes of Bewitching Book Tours.  You can read my review of their fun, young adult book here.  It is my privilege to interview these brothers below.

Fourteen-year-old Durriken Brishen has lost his parents, his grandfather, and though he doesn't know it, his Gypsy culture's dangerous gift.

Taken in and raised on the rails by the first woman to pilot a freight train, Durriken has one remaining connection to his Romani roots: a small wooden box that hangs from the hammer loop of his overalls.

The last gift he received from his grandfather, the box contains the world's first chess set. But a piece is missing: the Red Queen. According to Durriken’s family lore, the complete set awakens the power of Tărie, a mercurial gift that confers unique abilities on each new Master.
When a suspicious fire erupts in the Chicago rail yard, Durriken's escape produces an uneasy alliance, though not without its silver lining. Dilia is a few inches taller, several degrees cleverer, and oh yes – very pretty. While Durriken is uneasy allying with a girl whose parents were convicted of sedition, there's no doubt she is a powerful partner. And while it's not immediately clear to either, her own Guatemalan culture and family history are deeply entwined with the ancient Romani mystery.
Jumping box cars, escaping riverboats, deciphering clues, crossing swords with the brilliant madman Radu Pinch – with great American cities as its backdrop – Gypsy Knights is the page-turning saga of Durriken Brishen and his quest to rediscover his past.

Interview:
How did you get started writing?

Product of our misspent youths, reading everything, everywhere, anytime.  And there’s a long tradition of story telling in the family, stretching at least back to our great-grandmother Stapelfeld who talked so much she once swallowed a caterpillar that dropped off a leaf above her head when her mouth was open talking.

Who or what encouraged (or still encourages) you in your writing?

The list of people who have helped and encouraged us is deep and wide.  Our wives are big fans and we couldn’t do this or anything else without them (hey ladies!).  Our buddies Seth Groff and Josh Weinberger have had our writing backs at every step of the road.  And our Mom is a die-hard supporter who would do anything for us and really believes in our work.  Love you Mom!

What challenges have you faced and how did you overcome them?

Willie Stargell, a Hall of Fame Pittsburgh Pirates baseball player, once told a reporter at 3 a.m. in the airport, “I ain’t complaining, I asked to be a ballplayer.”  That’s how we feel about writing.  It’s a dream.  We ain’t complaining.

What made you decide to write a book together?  I would love to hear how the experience was.

We were both doing a lot of writing independently a few years back.  Rhett was writing screenplays and Lafe was traveling in Central America, doing a lot of travel writing.  Over Christmas, we took a long truck ride together helping our brother Beneau move home from Philly and got to talking about writing.  By the time we rolled back into the Burgh (Pittsburgh), we had a pretty solid outline for Gypsy Knights.  We’re lucky because we have natural brainstorming chemistry and know that we write better together than we do alone.  It’s a real privilege for us to work together.

What do you do when you are not writing?

How do you incorporate writing into your everyday life?  How do you fuel your writing?

We don’t sleep much.

Do you have any special routines or rituals for writing?

Romani are legendary for their sweet tooths and known to drink black coffee with sugar (no cream).  So we usually make Romani-style coffee and set about our business.  Beyond that, we have a little Gen X-Gen Y disparity going on.  Rhett sits at his dining room table with a laptop and slips in the earbuds.  Lafe works on Great Aunt Helen’s typewriter in his basement office in blessed silence.

I loved the Gypsy culture and chess strategies in the book. Can you tell us about this?

Our aunt and uncle adopted four kids and one of them – our cousin Eliza Rose – is from Romania and as near as anyone can tell is Romani (Gypsy).  She was our muse.  We got more and more interested in Romani culture and took a trip to Romania and Turkey together to do research (Turkey figures into the prequel).  And we also consulted with Dr. Ian Hancock – one of the leading Romani scholars in the world.

We’ve always loved chess and play whenever we get the chance.  Our parents have a beautiful chess table at their house where we can usually be found at some point after Thanksgiving Dinner and birthday parties.  That said, the chessboard in our book was really tough.  We insisted that it be a legitimate chess position that could have arisen naturally in a real game.  So we put a board together and just to make sure it worked, we asked resident Pittsburgh Chess Master Jerry Myers to review our board and give us some feedback.  In the nicest possible way, he told us it was complete rubbish and why didn’t we just let him know what we were trying to do and he would hook it up for us.  Which he did, so the chessboard is magic and Jerry Myers is a gentleman and a scholar.

Is there anything else you want to tell us about your book?

Most people who have read Gypsy Knights say the first few chapters are a touch slow and then by page 50 they can’t put it down.  This puzzles us, since there is a double murder in Chapter 1 and an arrest for treason in Chapter 2.  But we’ve heard the comment, so the sequel (GK2) will start with a bang.  So if you pick up Gypsy Knights, give it 50 pages.  If you get to the end and don’t like it, we’ll give you your money back.

What new projects are you working on or are excited about right now?

We have a few pretty cool projects in the hopper.  First and foremost, we’re hard at work on GK2.  Duri and Dilia will be back!  Lafe is finishing his detective novel “River Bottom Church of the Damned”.  And Rhett is polishing up one of the most futuristic sci-fi short stories ever written.

The Two Brothers Metz are happily settled in the rolling valleys of Western Pennsylvania – where they are hard at work on the second installment of The Gypsy Knights Saga.
Twitter: @twobrothersmetz