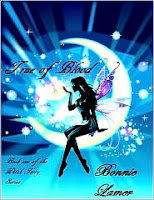 Book:  True of Blood (Witch Fairy Series) by Bonnie Lamer, ebook, 249 pages.  You can read the first chapter on the book's website.
Source:  I received a copy from the author for a fair review.
Available:  Amazon

True of Blood is about Xandra,  who lives with her aunt, brother, and her parents who are ghosts.  Strange enough, right? But on her 17th birthday she finds out that she is actually the daughter of the Fairy King and her mother is the Witch princess.  This makes her half Witch and half Fairy, a being so powerful that she was never supposed to exist.  The Witches want her dead because she is too powerful and the Fairies now want her back so they can use her to open the gateway between the Fae and human realms and wreck havoc on earth.  In order to protect their daughter, Xandra's parents have reluctantly had to entrust her safety and training to a fairy by the name of Kallen.

I found this book to be quite interesting and loved all of the paranormal and fantastical elements.  I enjoyed the Fae and Witch elements and even that Xandra's parents were ghosts.  There was also a great tension created between the Fae and Witch worlds that I found to be quite creative and fun.

Bonnie Lamer sets up some great conflict between Xandra and Kallen as well as the overall conflict of the fairies who want to catpture Xandra and those who wish to keep her safe.  These larger elements are interspersed with some fun humour, which is great at breaking the tension of all of the arguing and life and death situations.

The book revolves heavily around Xandra and Kallen, without many other characters actually appearing.  Even so, both characters developed and grew and the author was able to keep things interesting.

True of Blood is told in first person present narrative by Xandra, who is quite sarcastic at times.  She uses phrases such as "like that is going to happen", "not going there", and "have I mentioned" quite frequently.  Personally, I find this a bit repetitive and off putting, but it also reminds me of books I have reviewed recently such as Wither and Possession, though True of Blood is certainly not dystopian.  It is that teenaged, chatty, often cynical point of view, though that people seem to either love or hate.

There are also some grammatical issues in the book, which are unfortunate because they interfere with the flow of reading.

I imagine that young adults or adult who like fantasy and paranormal novels with a romantic element would enjoy this book.  It is entertaining and light and would make a great summer read.
Posted by Unknown at 07:13