I haven't participated in these memes for a few weeks due to some general craziness at my house.  Today, for both Friday 56 and Book Beginnings, I will use Theodore Boon:  The Abduction by John Grisham.  This is a middle school book written by Grisham and I was curious to see what it was like, given that I've enjoyed some of his adult novels.  This one is actually the second in the series, but I am hoping that won't matter.  I am only a couple of pages in so far, but will do a review when I am done.

Hi everyone, Here are the Friday meme's I am participating in this week.
The first is Friday 56, sponsored by Freeda's Voice.

Here are the rules:

From p. 56 of Theodore Boone:  The Abduction:


Slater was a veteran detective, the highest ranking, and the best in Strattenburg.  He was wiry with a slick, shaved head, and he wore nothing but black suits and black ties.  The city saw very little in the way of violent crime, but when they did Detective Slater was there to solve it and bring the felon to justice. 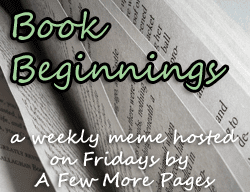 The next one is Book Beginnings sponsored by A Few More Pages.

How to participate: Share the first line (or two) of the book you are currently reading on your blog or in the comments. Include the title and the author so we know what you're reading. Then, if you would like, let us know what your first impressions were based on that first line, and let us know if you liked or did not like the sentence. The link-up will be at A Few More Pages every Friday and will be open for the entire week.

The first lines of Theodore Boone:  The Abduction:


The abduction of April Frinnemore took place in the dead of night, sometime between 9:15p.m., when she last spoke with Theo Boone, and 3:30 a.m., when her mother entered her bedroom and realized she was gone.  The abduction appeared to have been rushed; whoever took April did not allow her to gather her things.

Like I said, I've only read a few pages so far, but I think this will really appeal to middle school and even young adult readers, especially boys.  It has a macho feel to it, with all of the typical, grizzly detective themes and stereotypes.  It will be fun to see what Grisham does with this.
Posted by Unknown at 08:16