Hello Everyone.  I am excited to interview Joseph Corsentino, the author/artist of the stunning graphic novel series, Afterlight: End of the World.  Thank you to Bewitching Book Tours for putting this tour for Book 1:  Time of the Faeries together.  You can read my review of his book here.

Joseph Corsentino is a storyteller at heart who chooses photography as his medium.  He took his passion for Science Fiction and Fantasy to Los Angeles where he began Time of the Faeries, an epic retelling of the faerie mythology.  His stunning, ethereal, and realistic faeries, angels, and vampires can be seen in private collections and magazines all over the world.  His first book, published by Imaginosis Publishing, is a prologue into the Time of the Faeries universe.  Joseph is currently completing the four-part Afterlight graphic novel series and making appearances at conventions such as Dragon*con. 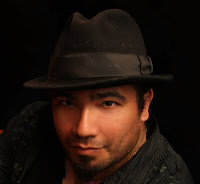 You show such great imagination in your art and writing, what do you do to nurture your imagination?
Music inspires me.  Every image is created in the presence of music.  I never work in silence.  I can never tell if music inspires the mood or the mood inspires the music, but I know for sure that the music that I am listening to is reflected directly in the image.

Who or what encouraged (or still encourages) you in your creative endeavours?  Have you always wanted to be a photographer?

I picked up photography as a way to tell my stories.  I am a storyteller at heart, my head is always crazy filled with ideas, emotions, and visions that I want to lay down in story form.  I chose photography to illustrate these ideas.  The next step was for me to combine photography and storytelling into the graphic novel, Time of the Faeries: Afterlight.

My family, friends, fans, and models all encourage me to continue on this creative path.

What challenges have you faced and how did you overcome them?

I took only one course of photography in my life!  And none in Photoshop.  Everything that I can do, I’ve had to learn on my own, the hard way, and not everything I do is standard.  At a convention panel one year, I announced to the audience that I don’t use masking and all the Photoshop users gasped.  At which point, I realized that I did something non-standard.  However, I make it work for me and incorporate it in as part of my organic, blending process.

What do you do when you are not creating amazing photographic art?

I watch an insane amount of movies with my wife, play with my four cats, and search for NEW music to listen to. 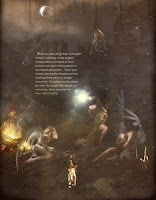 What is Time of the Faeries?


Time of the Faeries is an epic re-imagining of the faerie mythology, bringing gritty reality into fantasy. Currently, it is in the form of several books, and lots and lots of beautiful artwork based on photography and Photoshop.
Time of the Faeries, over the years, has developed into a massive storyline, taking us into a post-apocalyptic future and a not-so-idyllic past.
What is The Afterlight series?


The Afterlight Visual Novel Series combines digital art and narrative to create an epic four part tale, delving into the evolution of the new mythology.
What made you write Time of the Faeries: Afterlight?


Time of the Faeries grew quickly and spans 10,000 years of the past, present, and the future. As the story matures, I realized that it’s too big to be told in just one art form, one image at a time. Instead, it began to take the form of a novel series grounded in artwork. The Afterlight series is actually only the first series in the entire mythology already planned and drafted.

Where are the faeries?


The first book, Afterlight: End of the World, begins with the apocalyptic end, with angels hunting the last humans in existence. There are no faeries mentioned outright in the book! I started the story with this bleak future to show what the world would look like without faeries. Once the faeries arrive, then the fun can commence!

Why did you choose to make the angels the bad guys?


Someone had to be the bad guys, and many people will be mad that I chose the angels to be bloodthirsty killers. In the mythology, they represent the dogma of unchanging religion and the narrow mindset of “don’t rock the boat.”
How do you create your compositions? 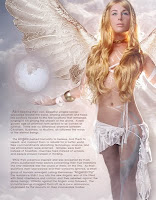 My artwork is based on a collaboration with the people who model for me. First, we find a person with the “spark” or characteristics that we are looking for. We invite them to do a photoshoot with us, dress them up, then spend a few hours shooting and building a character. Finally, it’s time for me to sit at a computer for hours and days building the magick and background using Photoshop as my artistic tool. It is an intense process for me and the models.

Who are your favorite artists and authors?


I am a Sci-Fi movie fan. My heroes are J. Michael Stracynski, Joss Whedon, Ron Moore and Brian Fuller and other film storytellers. Visually, I am still inspired by Luis Royo and Brom, sexy and moody art.
Do you believe in faeries?


I do believe in faeries! I believe in the faeries of today, the modern, urban faeries, the people we meet at important juncture in our lives that sets us on a new path, the conversations at 3 a.m. that starts us reflecting, the serene girl out of the corner of our eyes with that something special about her…Yes, yes I do believe in faeries. Come play in my universe and you will too!
Tell us about yourself and what draws you to fantasy.


I’ve been a photographer for over ten years now, but got into fantasy photography about eight years ago. With a group of friends, I used to run around Long Island, NY taking photos and having fun. At one particular photoshoot, we shot a dozen faeries, creating individual wings and costumes for everyone. From that single photoshoot, I was inspired to create more fantasy art. Years later, Time of the Faeries evolved. Me personally, I’m a media geek, more drawn to Science Fiction than fantasy, the more epic, the better. District 9 has really inspired me to take a deeper look at my concept of a street faerie. My walls, shelves, and table tops are lined with Transformers figures and always have. I’m a fan. I guess that’s why I create art, because I enjoy this stuff! 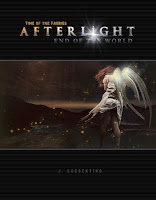 What do you hope people will take away from your mythology?


On a trip to Tiajuana, Mexico, I got lost and found myself in the red light district, streets lined with young girls prostituting themselves. Their desolate poses as they stand there, waiting, struck me so deeply that I created the idea of the street faeries, creatures of magick lost in our urban lifestyle. What I hope people will draw from Time of the Faeries is that magick is there in our world, even in the grittiest of places. But at the end of the day, it's about people doing the work, not relying on fantasy or magick. --- It's about people working as people to evolve and create and better themselves and the world around them.
What new projects are you working on or are excited about right now?

Time of the Faeries: Afterlight graphic novel series is my major project right now.  It’s taking up all of my time, but I’m loving every minute of it.  I’m also working with a producer to turn Time of the Faeries into a major motion picture and an RPG video game.

Thank you so much for visiting my blog today, I loved learning more about how you made this unique book!!!