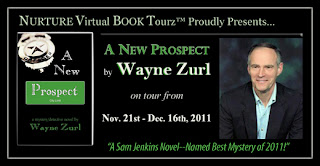 Hello Everyone, I am very excited today to interview Wayne Zurl, author of the exciting detective novel, A New Prospect, as a part of his blog tour with Nurture Virtual Book Tours.  You can read my review of his book here.  Mr. Zurl has also graciously offered TWO copies of his book to give away, one print copy (US & Can) and one ecopy (International).  In order to enter, simply leave a comment bellow and include your name and email address and whether you are entering for the print copy, ecopy or both.  The contest closes at midnight Dec 12 and the winner will be announced Dec. 13.  Winners will be chosen using Random.org.

First off, a summary of A New Prospect:
Sam Jenkins never thought about being a fish out of water during the twenty years he spent solving crimes in New York. But things change, and after retiring to Tennessee, he gets that feeling. Jenkins becomes a cop again and is thrown headlong into a murder investigation and a steaming kettle of fish, down-home style. The victim, Cecil Lovejoy, couldn't have deserved it more. His death was the inexorable result of years misspent and appears to be no great loss, except the prime suspect is Sam's personal friend. Jenkins' abilities are attacked when Lovejoy's influential widow urges politicians to reassign the case to state investigators. Feeling like "a pork chop at a bar mitzvah" in his new workplace, Sam suspects something isn't kosher when the family tries to force him out of the picture. In true Jenkins style, Sam turns common police practice on its ear to insure an innocent man doesn't fall prey to an imperfect system and the guilty party receives appropriate justice. A NEW PROSPECT takes the reader through a New South resolutely clinging to its past and traditional way of keeping family business strictly within the family.

And now, I would like to welcome Wayne Zurl to my blog today:
Why did you decide to start writing?  Have you always wanted to be a writer?
Going back more than forty years to when I became a soldier and travelling forward to the twenty years I spent in a police department, I’ve had to write reports as part of those jobs—after-action reports, arrest reports, prosecution worksheets, annual reports. Had they been transcribed onto toilet paper, they’d span the globe twice. I never chose to write then, but rather had the necessity thrust on me.

When I retired, I volunteered at a Tennessee state park and ended up writing publicity for their living history program. That writing led to getting twenty-six non-fiction magazine articles published. Seeing my name in national publications was exciting. Finding publisher’s checks in the mailbox was pretty cool, too. Ten years of writing non-fiction caused a slight rut. So, I decided to try fiction and the bug is still biting me.

How does your own background with the police force influence what you write?
When I read crime fiction by other authors, I’m a real pain in the butt over authenticity. If they get small details wrong, I shake my head. Of course, that obligates me to get them all correct. But like any other author, I sometimes ask readers to suspend their disbelief and occasionally I’ll put my protagonist into a position that his training and experience would generally steer him away from, but that’s only to create the tension and conflict readers demand.

Most of the stories I write come from actual cases I worked, supervised, or just knew a lot about. I fictionalize everything, embellish them, and transplant them from their origins in New York to Tennessee.

Who or what encouraged (or still encourages) you in your writing?
A moderate amount of success is pretty encouraging and keeps me sitting here writing new novels or novelettes for two publishers who seem happy with my products. But the real voice of encouragement is my wife. She’s very realistic in her criticism and gives great pep talks.

What challenges have you faced in your writing and how did you overcome them?
When I began the Sam Jenkins mystery series based on the real investigations I mentioned earlier, I made the mistake of thinking I could use fiction to perfect police work. I thought hindsight would allow me to do things I, as a cop, may have forgotten, ask the questions I never asked, and get everything right the first time around and resolve the situations without any hitches. Big misconception.

After I thought A NEW PROSPECT was complete and finished, I took it to a retired editor turned book doctor for an evaluation. His first opinion was: It would have been a big hit back in 1985, but it didn’t fit the mould 21st century publishers wanted in a police mystery. Next he said, “Your main character is too perfect. Nobody likes perfect. Give him a couple of flaws. Write in a few mistakes that will make a reader grit their teeth.”

I jumped through hoops to restructure the whole novel to fit into the 21st century template. Giving Sam Jenkins character flaws was easy. He doesn’t exactly get hit over the head in every episode like Jim Rockford or Philip Marlowe, but I hope some of the chances he takes will create tension for the reader.

What do you do when you are not writing?
I’m probably not exceedingly good at it, so I’ll say unfortunately I spend lots of time at post-publication promotions—hours a day. But it’s necessary and I am learning the electronic media ways of marketing.

For fun we travel. Over the last few years, we’ve made several pretty exciting excursions. A river boat trip from Budapest to Amsterdam, a small boat cruise along Alaska’s inside passage, a buffalo round-up in South Dakota, and a couple more equally memorable vacations. We don’t sit on the beach and read.

How do you incorporate writing into your everyday life? How do you fuel your writing?
I try to write in the morning. Maybe the caffeine from breakfast gives my brain a few extra RPMs? The fuel comes spontaneously and I can’t explain how or why. I may get an idea for a story at 3 a.m. or while I’m doing 70 on the Interstate. At three in the morning, I probably won’t get back to sleep. When I get off the highway, I jot down my thoughts so I won’t forget.

Do you have any special routines or rituals for writing?
I start out the old-fashioned way with a pen and lined pad. When I’m finished, I proof read it for content and any obvious mistakes (assuming I can read my handwriting.) Then I transpose everything to a Word document, edit it again, and then print it so my wife and sister can read it. Then I post chapters to an on-line writer’s workshop. After I incorporate all the ideas I’ve been given and correct the typos and nits others find, I go over it again. Now I’m ready to peddle it to a publisher.

Is there one passage in your book that you feel gets to the heart of your book and would encourage people to read it?  If so, can you share it?
I’d like people to think Sam Jenkins is the heart of the book. His personality and the way he looks at the world influences all the happenings at Prospect PD. He’s never at a loss to interject a bit of sarcasm or humor at a serious moment. That’s the way it often is in real police work.

Here’s a quick snippet of dialogue from his interview with the murder victim’s wife. She gave Sam oodles of pressure and hard times as he tried to solve her husband’s murder. Meet the widow Pearl Lovejoy.
“Has he had any recent problems with anyone? Problems that may have precipitated a heated argument that ended up this way?” [Sam asked]
“My husband had problems with no one, thank you very much.”
Only two questions and she sounded impatient. I just looked at her for a long moment.
Without prompting, she continued. “I know of no one Cecil would consider an enemy, and surely no one would ever mean him any harm or harbor ill feelings towards him.”
I wondered if we were talking about the same Cecil Lovejoy. I only knew him for thirty minutes and I wanted to drop him down an elevator shaft. Hell, there are people out there who harbor ill feelings against Santa Claus. Surely someone took issue with Cecil’s lousy personality.
I didn’t buy her answer and thought rephrasing the question may convey my disbelief.

What new projects are you working on or what are excited about right now?
I’ve just sold two novelettes (numbers 9 and 10 in the Sam Jenkins series—THE GREAT SMOKY MOUNTAIN BANK JOB and FATE OF A FLOOZY) that are going to be produced as audio books and simultaneously published as eBooks. These projects are moving along nicely.
My second full-length novel, A LEPRECHAUN’S LAMENT has just passed the second round edits with flying colours and is ready for formatting. The cover art is finished and the promotional video is being worked on as I’m writing this. The target release date is early 2012. For obvious reasons, I’d like to see St. Patrick’s Day as the debut.
I just signed contracts to create two hard copy anthologies from ten novelettes. SMOKY MOUNTAIN MYSTERIES is slated for 2012 and MORE SMOKY MOUNTAIN MYSTERIES for 2013.
And I’m almost finished with my final edits for another Sam Jenkins novel, HEROES & LOVERS, and will be able to send it to the publisher when he’s ready.

Thank you so much, Mr. Zurl, I've really enjoyed having you here today.


Author Bio: Wayne Zurl grew up on Long Island and retired after twenty years with the Suffolk County Police Department, one of the largest municipal law enforcement agencies in New York and the nation. For thirteen of those years he served as a section commander supervising investigators. He is a graduated of SUNY, Empire State College and served on active duty in the US Army during the Vietnam War and later in the reserves. Zurl left New York to live in the foothills of the Great Smoky Mountains of Tennessee with his wife, Barbara.
Eight (8) of his Sam Jenkins mysteries have been produced as audio books and simultaneously published as eBooks. His first full length novel, A New Prospect, was named Best Mystery at the 2011 Indie Book Awards by the Independent Publishing Professional's Group. It is also available on Kindle.
Author’s Website: http://www.waynezurlbooks.net
Author’s Twitter Account: http://www.twitter.com/#!/waynezurl


Don't forget to enter to win a copy of Wayne Zurl's engaging book.  I have TWO copies of his book to give away, one print copy (US & Can) and one ecopy (International).  In order to enter, simply leave a comment bellow and include your name and email address and whether you are entering for the print copy, ecopy or both.  The contest closes at midnight Dec 12 and the winner will be announced Dec. 13.  Winners will be chosen using Random.org.  Winners will have 2 days to respond after I email them or a new winner will be chosen.
Posted by Unknown at 18:23