Today is my stop on the Barking Mad book tour put together by Kismet Book Touring.  I am lucky enough to have a guest post, a review and a giveaway!!

About Barking Mad - goodreads, Amazon, Typecast Publishing
The year is 1931. The scene is werewolfishly classic English fare. And tonight the moon hangs as full as a royal pie plate in this inaugural Reginald Spiffington mystery when the none too obsequious playboy, Reggie, sets out for a delectably long weekend at Huffsworthy Hall to assist his dear friend, Moony, in his failing endeavor to take the hand of his lady-love and to partake in the culinary talents of the genius chef running the kitchen. With no one reason more important than the next, he'll be off straight after breakfast. Reggie's itinerary for the weekend turns abruptly less toothsome when he decides to solve the unexpected murder of another of the Hall's guests, a guest whose luggage is secretly packed full of nefarious plans. Soon, all Huffsworthy's inhabitants are potential suspects, including Reggie s saucy, quick-witted love-interest, Mimsy Borogrove. Aided by his invaluable valet, Pelham, and armed only with his knowledge of detective novels and a newly acquired set of keener, canine senses, Reggie sets out to find the killer before another meal falls to ruin.


A Day in the Life of Reginald Spiffington

Hello everyone! I’m happy to be here at Books and Other Adventures. Coreena has asked me to write about a typical day in the life of Reginald Spiffington, the main character in my novel Barking Mad.

I suppose the first thing to know about Reggie is that he’s all about comfort. He sleeps late, and woe betide anyone who awakens him before nine or ten in the morning. His clothes will have been laid out by his manservant Pelham. After a bath and a shave he will head down to breakfast, thoughtfully laid on by Pelham in a grand manner. Reggie is a connoisseur of fine food, and as such he eats largely and often. Bacon, eggs, muffins, jam, two kinds of juice, and coffee are the minimum. Kippers on Tuesday.

The racing papers will occupy our man until late morning. He may stroll through the park—Reggie’s flat is just off Regent’s Park and he enjoys the zoo—or else take the car into London where he will relax at his club, the Idlers. Lunch from twelve to two, either at the club or with an acquaintance at a restaurant in the city. Reggie is particularly fond of Regentio’s, due to the quality of the beef and Chef Field’s delectable pastries. Ideally, the afternoon brings billiards or some sporting event, and the evening will be spent with someone young and lovely. If you can trust rumors, lately Reggie’s has been seen about town with fetching crime novelist Mimsy Borogove. Dinner and the theatre are frequent choices, though a moonlit stroll by the Thames is always a good fallback.

Of course, throughout the day he is also engaged in typical activities: ignoring telegrams and phone calls from his stern and meddlesome grandfather, drinking whatever scotch there is to be found, and looking dashing. If it’s a Friday, most likely Reggie will be making preparations to travel into the countryside, where he will visit one of his several bosom chums at whichever ancestral manor house is taking guests. These weekends are a joy for our boy Reg, who loves to have tennis courts, a fully stocked bar, and a master chef at his beck. The tendency of other guests to show up dead is a regrettable distraction, but so far Reggie has risen to these trials admirably. Of course, during all of these activities, Reggie is aided immeasurably by the steady and skillful attentions of Pelham. I don’t know what Reggie would do without him, really.

Reggie does tend to make himself scarce three or four days out of the month, usually around the full moon. He leaves London, but doesn’t travel to the homes of friends or relatives. Those who know him aren’t sure why or where he goes during these monthly periods of absentia. When asked, Mimsy Borogove gives a maddening little smile, and changes the subject.

My Review:
This was such a fun book to read, I found myself laughing and unable to put it down. This was a funny blend of historical fiction murder mystery that doesn't take itself too seriously.

Right from the start, I enjoyed the chatty, 1930's style and wry humour.  The main character, Reginald Spiffington, speaks directly to the reader and engages them in the story.  He's a shallow, yet endearing playboy who finds himself in the middle of a murder mystery investigation while staying at his friends country manor for the weekend.

I love how the book plays with the stereotypes in these kinds of murder mysteries, pushes these to the limit, and even adds a fun twist.

One of my favourite parts of the book were the descriptions.  Here is how one of the police officers is described:


He was not what most people would call easy to look at, and by most people I refer mainly to the sighted.  He gave one the suggestion of a Sunday roast that had put on a uniform and grown a moustache.  (p. 54-55)

This is the kind of sarcasm and witty humour found all through the book.

My one criticism of the book is that it took a little while to get the story really going, but I did enjoy getting to know the characters as it did.  I highly recommend this book it you are looking for something funny and engaging or are a fan of murder mysteries. 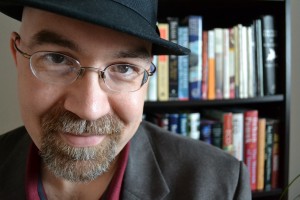 About Jamieson Ridenhour - website, Facebook, Twitter, Goodreads
Ridenhour is the author of Barking Mad: A Reginald Spiffington Mystery, available from Typecast Publishing in June of 2011. He is the editor of the Valancourt edition of Sheridan Le Fanus 1872 lesbian vampire novella Carmilla, as well as creator of the award-winning short fairy-tale horror film Cornerboys. The South Carolina native now lives in Bismarck, ND, where he writes poetry about movie monsters and murder-mysteries with werewolves in them. He also plays wicked lead guitar with Bismarck-based rock and roll band Blind Mice, lectures on vampires and Charles Dickens (though not at the same time), and generally frolics on the plains. He lives with his wife Gwyn and their two children Ian and Eva. 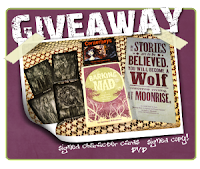 Contest Info: Jamie is offering a giveaway for all entries gathered during the Tour. A signed copy of Barking Mad, 4 unique signed character cards and a DVD.