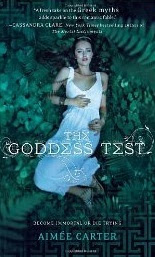 Synopsis from Goodreads:
Every girl who had taken the test has died.
Now it's Kate's turn.
It's always been just Kate and her mom - and her mother is dying. Her last wish? To move back to her childhood home. So Kate's going to start at a new school with no friends, no other family and the fear that her mother won't live past the fall.
Then she meets Henry. Dark. Tortured. And mesmerizing. He claims to be Hades, god of the Underworld - and if she accepts his bargain, he'll keep her mother alive while Kate tries to pass seven tests.
Kate is sure he's crazy - until she sees him bring a girl back from the dead. Now saving her mother seems crazily possible. If she succeeds, she'll become Henry's future bride and a goddess.
If she fails...

My Thoughts:
I have a huge passion for Greek mythology, so was excited to read this book, though I put it off for a long time. Now having read it, I'm torn.

Kate and her fatally ill mother move to Eden where Kate meets Henry, a mysterious, dark stranger - and who says that he is Hades, the Greek god of the underworld. She makes a deal with him, to live with him and try to pass some mysterious tests, and he will keep her mother alive.

I loved the mythological aspect of this book. Carter does a great job combining the traditional myths with a modern story - she plays with it in a fun way. This was, by far, my favorite part of the story.

The story of Kate and her tests left me wanting. I liked Kate well enough and felt for her, but her time on Henry's estate felt flat. She spent a lot of time whining about her cloths and I couldn't understand how the future queen of the underworld didn't have any say in what she wore.

Then there were the tests - Kate was told at one point that she had passed one, but wasn't even curious what it was. Then the other tests all kind of occurred in an obscure way. I actually felt cheated because there was a loss of conflict. The anticipation was set up, but not fulfilled.

I did like Henry. He is sad and brooding, dark and mysterious, but also powerful and kind.

All in all, it was a book I was able to tear through quickly and I am curious enough to wonder what will happen next, so will definitely look up the next in the series.
Posted by Unknown at 11:44