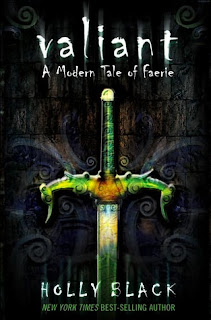 Synopsis from Goodreads:
When seventeen-year-old Valerie runs away to New York City, she's trying to escape a life that has utterly betrayed her. Sporting a new identity, she takes up with a gang of squatters who live in the city's labyrinthine subway system.

But there's something eerily beguiling about Val's new friends.
And when one talks Val into tracking down the lair of a mysterious creature with whom they are all involved, Val finds herself torn between her newfound affection for an honorable monster and her fear of what her new friends are becoming.

My Thoughts:
I love how Holly Black writes about characters who are normally invisible in YA books, and this book is no exception. This is the second book in the Modern Faerie Tales series, though it is more like a companion book with the world that Black created, rather than continuing the story of the first book. This installment focuses on teens who are living on the street in New York.

I enjoyed this - Black is a fantastic story teller and I enjoy the dark world of faeries that she has created. However, I didn't like this one as much as Tithe, the first in the series.

Seventeen year old Val runs away from home and finds herself living on the streets with a group of other teens who squat in the subway tunnels. They are linked to the world of Fey and take a faerie drug that gives them a unique high.

Val's character was good and I liked how she developed. I could understand her anger and betrayal, but she also grew beyond that. I wasn't as fond of the group of homeless teens that she hooks up with. I also found reading about taking copious amounts of drugs uncomfortable.

Overall, I liked the dark story and that faeries are not portrayed in a "nice" light. Black writes with a frank and honest tone that I think will appeal to many fans of YA fantasy who are looking for something different.

Note: There are significant amounts of drug use, swearing and sex in this book.
Posted by Unknown at 12:07