Book Review: Kill All The Judges by William Deverell 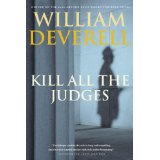 In anticipation of the 2011 Shuswap Writers Festival that will be happening in Salmon Arm, BC at the end of May (which I am so excited to attend), I have decided to try and read books from some of the authors who will be there. This particular writer's festival will concentrate on BC authors. I have already read books by some of the authors, but not for all of them.
Recently I picked up Kill All The Judges by William Deverell. Several BC judges have been killed and no one knows if it is just a coincidence. Cudworth Brown, a backwoods, uncouth poet from Gabriolla Island is accused of killing Justice Whynet-Moir. Brown is being represented by Brian Pomeroy, a hotshot lawyer who has gone off the rails after his divorce. He is now on cocaine, is delusional, and is writing a creative non-fiction mystery about the case. After Pomeroy runs from the courtroom on the first day, Arthur Beauchamp, a fellow islander, is reluctantly recruited to come out of retirement and represent Brown. Beauchamp has better things to do: he has a farm to run, his wife is running as the federal Green Party representative, and he is given only three days to prepare for the major trial. That, and he does not like Brown.
First off, I have to say that Deverell has an amazing vocabulary and his use of language is wonderful to read. Also, Deverell was a lawyer himself and has an obvious familiarity with the legal system. I also loved his descriptions of the islands and Vancouver, places where I have spent time.

I enjoyed reading this book, especially the different levels of the story. I liked how Deverell used Pomeroy's mental breakdown and novel writing to create different aspects to the story and move the plot along. Some of this was even quite funny. However, there are four different voices in the book and at first it was a bit confusing, but I found it did not take long to figure it out. The dialogue was great as well and the characters all developed nicely. There were some good surprises and some of the minor characters were good as well. I would recommend this book to anyone who like murder mystery or legal books.

Kill All The Judges is the sequel for April Fool, from what I understand, and I will be sure to keep my eyes open for it as I liked the Arthur Beauchamp character.

William Deverell, Kill All The Judges, McClelland & Stewart Ltd, 2008.
Posted by Unknown at 18:35