Book Review: Tales From The Odyssey by Mary Pope Osborne 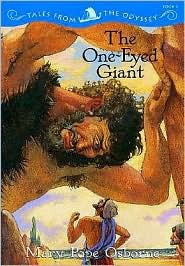 Tales From The Odyssey is a series of six children's books that retell Homer's Odyssey.  They are written by Mary Pope Osborne of The Magic Tree House fame and are written for a similar age group, I would say around grade 2 to 6.  The names of the characters may be a bit complicated, but there is a pronunciation guide in the back.  I have chosen to review the series as a whole because I tend to think of The Odyssey as a whole, that and we read them so fast that they seem like one story.

I recently read the whole series of six with my middle son who is in grade 2 and he was completely hooked by them, and even my eleven year old found himself listening in as I read - after all, these are entertaining, exciting stories that have been around for thousands of years!  I picked the first book up because I am a HUGE classical mythology fan, to the point of studying it in university.  I am always on the lookout for good versions of classical stories to share with my kids and I am very impressed with Mary Pope Osborne's version of The Odyssey.  I would say it is quite obvious that she did her research as the story rings true to the original, but in a much shorter and more accessible kid's version.

Mary Pope Osborne focuses on the action of the original epic poem - for example, the Cyclops, Scylla and Charybdis, the Sirens, and various other monsters.  There are battle scenes, blood and guts, fighting and shipwrecks.  The gods interfere, Odysseus pines for home, the sea rages, and the ten years of Odysseus's travels are told with a feel of the original.  She even mentions the "wine dark sea" several times, which is one of many epithets used throughout The Odyssey.  Epithets are such an important part of Homer's work that I love that Mary Pope Osborne included this one in her retelling.

While looking at reviews of this series, it is clear that the fourth book, The Gray-Eyed Goddess, is the least favorite.  This corresponds to The Telemachy in The Odyssey, the part where Telemachus sails around Greece looking for word about his father, and is probably universally considered to be the least favourite part of the epic.  That people found this book to be the most boring of Mary Pope Osborne's retelling again is evidence that she remained true to the original.

Each of the six books could stand alone as an exciting adventure story, but the books also build on one another and readers will want to know if Odysseus ever makes it home again to his wife and son.  Listed below are the six books, each with a brief summary courtesy of HarperCollins:

Book 1:  The One-Eyed Giant:  When Odysseus must leave his home to fight in the Trojan War, he never imagines that he'll be away from his family for so many years. Now, at long last, he is leading his men across the seas. But many dangers await them -- and none is more terrifying than Polyphemus, the one-eyed giant.
Book 2:  The Land of the Dead:  Odysseus and his men have defeated the one-eyed giant, but its curse plagues them at every turn. Cast out to the open seas by the wind god, Odysseus and his men face giant cannibals and outwit a beautiful witch, who reveals Odysseus's next challenge -- a journey to the mysterious and feared land of the dead.

Book 3:  Sirens and Sea Monsters:   Odysseus and his men have done what no other mortals have done: returned alive from the terrifying Land of the Dead. Armed with warnings and advice from the ghost of the prophet Tiresias, Odysseus is determined to finally sail home to Ithaca. But the enchantress Circe tells him the Greeks will face even more horrors on their journey, including an encounter with Scylla, the six-headed monster, and Charybdis, the deadly whirlpool. Who will survive these terrors -- and how?

Book 4:  The Gray-Eyed Goddess: Odysseus is trapped on the island of the sea goddess, Calypso. The beautiful goddess wants him to forget his wife and son and marry her, but he is determined to return home. Back in Ithaca, Odysseus' wife, Penelope, and son, Telemachus, desperately fend off suitors who want to marry Penelope in order to take control of Odysseus' island. It is only with the help of the gray-eyed goddess Athena that they can hope to ever become a family again.

Book 5:  Return to Ithaca:  After years of captivity on Calypso's island, Odysseus finds himself on the shores of yet another strange land. Meanwhile, his wife, Penelope, fears for their son Telemachus. His enemies -- Penelope's unwanted suitors -- plan to ambush and kill him upon his return to find his father. But the family's years of suffering come to an end, as father and son are reunited in a series of startling, strange, and magical events. Odysseus is finally home. And now his revenge beings ...

Book 6:  The Final Battle:   After struggling against the gods and his fate for more than 20 years, Odysseus has returned to Ithaca at last. But things have changed: his island has been overrun by suitors who clamor for his wife's hand in marriage and plague his son Telemachus. With the help of the gray-eyed goddess Athena, Odysseus and Telemachus must set out to regain control of Ithaca.
Posted by Unknown at 16:04