Book Review: My Lobotomy by Howard Dully and Charles Fleming

Today I am very excited to announce that my blog is being written by Maggie Thistleton, a guest blogger.  She has written a book review of the memoir My Lobotomy by Howard Dully and Charles Fleming. 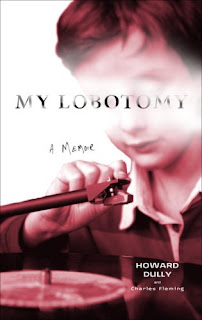 My thoughts
I once saw My Lobotomy, by Howard Dully and Charles Fleming, while browsing a used book store.  It was in the staff picks section, so I assumed it must be worth the read.  But after just finishing college, I really didn’t feel like sticking my nose in a heavy book for quite some time, even though I’ve spent most of my life in books.

Fast forward about a year and a half later - I randomly received My Lobotomy as a birthday gift.  It was time to pick up my first book to be read for pleasure since I moved away for college.

Howard’s story
Whether one can really call this a pleasurable read is debatable. My Lobotomy is Howard Dully’s personal memoir of his life before and after receiving a lobotomy at age 12. The story is interesting, inspiring, and very well told. Throughout the book, I often had the feeling that Howard was sitting next to me, giving his incredible life story to me, and no one else.
Howard’s story begins with a history of his life. It seems he had a pretty normal childhood. One of several children, Howard lost his mother when he was young, and his father re-married a tomboy woman named Lou who had a few children of her own.  From the beginning, it’s obvious Lou has something against Howard. It isn’t because he’s not biologically hers; she acts motherly towards Howard’s natural siblings. She makes Howard out to be the ultimate problem child, while he remembers being a fairly normal kid.

Lou had been convinced that there was something wrong with Howard. She took him to various doctors and psychologists, who informed her that he was just a normal, rambunctious young boy. After exhausting all options, Lou brought Howard to see Dr. Walter Freeman. After several interviews with everyone but Howard, Dr. Freeman decided that the boy was schizophrenic. He finally briefly met with Howard, then convinced Howard’s parents that he needed a lobotomy.
In 1960, at 12 years old, Howard became one of the youngest patients to receive a transorbital lobotomy.  Dr. Freeman had performed these on a number of patients - some were successful, but most weren’t. After a short recovery, Howard left the hospital and bounced between family members.  Lou felt he was unfit to have around their other children; she seemed almost scared of him.

Howard’s teen years were spent being shuffled between his own home and those of various family members, until eventually he became a ward of the state and lived in mental asylums. He had almost no side effects from the lobotomy and seemed quite normal, so he quickly became one of the popular kids in each asylum he visited. In his late teens, he lived in halfway houses and got in trouble for writing bad checks to fund his carefree and drug-addicted lifestyle. He spent some years homeless and lived in various apartments with other addicts.

In the end
Howard eventually started to tame his ways after having a child. He married Barbara, and they helped each other clean up their lives. As an adult, he began to question his past and why he was given a lobotomy. Dr. Freeman and Lou had died, and his father wasn’t the type to open up about the past. A documentary crew heard about his search and offered to help, in exchange for a documentary. As a patient of Dr. Freeman’s, Howard was given full access to Dr. Freeman’s lobotomy records. As most people either died or became brain dead after the procedure, Howard was the first person to request to see his file.

His file was full of photos, some of his actual procedure, as well as transcripts from every interview Dr. Freeman conducted with his family. Hearing the way Lou talked about Howard as a child makes the reader feel very sympathetic towards Howard, and also incredibly angry at Lou. Howard takes the reader along his personal struggle, and the reader shares how he received his closure after his bold, popular interview crashed the NPR servers.
Given the nature of the subject and the hard, compromising life Howard has lived, you can’t help but have a sense of peace at the end of his story.  It’s a story of survival, and Howard Dully definitely came out ahead.

As a writer
My Lobotomy is a very easy book to read. It reads more like a conversation between Howard and the reader than an actual book. Howard uses his own language, no fancy terms or heavy medical terminology, so you always understand what he is telling you. He has a good, clear writing style that is appropriate for someone writing their first memoir, so don’t be expecting to read an in depth literary novel. Overall, this is a great and easy read for anyone, but because of drug use and promiscuous behaviors, I’d recommend high school age and up.

Bio
New to the world of SEO, I traded in museum studies and caring for snakes for blog writing and organic marketing. I like to mix the marketing with fashion.
Maggie@oneclickventures.com
twitter: gret_herself