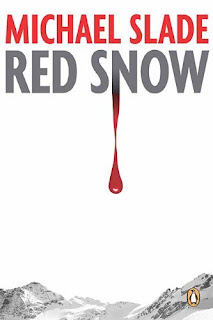 I am going to attend the Shuswap Writers' Festival in Salmon Arm, BC at the end of May and am so excited that I thought I would try to read a book from each of the authors attending, or at least as many as I can before the festival starts.  That is why I chose to read Red Snow, quite honestly a book I probably would never have read otherwise.

Summary:
Red Snow takes place in December before the 2010 Winter Olympics in Whistler, BC.   Psycho killer, Mephisto, has a score to settle with RCMP detachment Special X in general and Chief Superintendent Robert DeClercq in particular.  He also has a grudge against most of the world, thinking it overpopulated.  Mephisto sets out to cause havoc, fear, and mass murder before the Winter Olympics start, while security is not as tight as it will be for the events themselves.

My Thoughts:
As a resident of BC, I found Michael Slade's views on the 2010 Winter Olympics interesting - he certainly does not shy away from presenting his views on the politics, spending, money grabbing and general craziness that surrounds the Olympic Games.

Michael Slade does an incredible amount of research on many topics for this book and is obviously quite knowledgeable about any history he presents.  I found most of this history interesting and relevant, but sometimes it was not very relevant.

There were a huge amount of characters in this novel and I quite frequently found myself confused about who people were.  Sometimes it felt like each chapter was about a new character and their point of view.  Many of these characters were obviously from previous novels and Slade spent a lot of time filling in details of their past and back story.  This, combined with the long passages of history, in some ways, slowed down the novel.

In other ways, the novel moved very quickly.  When there was action, it was fast, detailed and vividly gory.  There was a high body count with sickeningly horrible scenes of death described in creative detail.

Overall, though this book was not for me, I could appreciate Slade's creativity, interesting plot twists, and ability to create a truly horrible psycho killer against the realistic backdrop of the 2010 Olympic Games and real events, politics and scenarios of the time.  In the end, though, the horrible deaths and "blood and guts" were just not for me.  If you like gory suspense thrillers with abrupt language and lots of machismo, then this book may be for you.
Posted by Unknown at 08:24