Writing Wednesday: Writing A Poem a Day is Hard 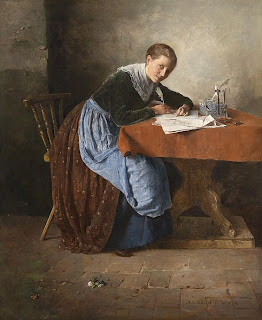 Writing a poem a day is HARD, much harder than I expected it to be. I am a huge fan of Nanowrimo and can usually write 2000 words a day when properly motivated, but a poem a day? Even a short one? Well, this is turning out to be a different kind of challenge for me.

Part of it is the lack of flexibility. With Nano, you could take a day off, or only write a little bit, but make up for it later in a great show of writing frenzy. At times, the novel takes on its own momentum and almost writes itself.

A poem a day is much more disciplined. And it uses a different part of my brain. Which is good. Which is why I chose not to join Camp Nano this month and do Napowrimo instead.

I also need a different kind of head space to write a poem - it's a struggle to come up with a unique idea and form and carry it out every day. With novel writing it is different. Even when I don't know what to write, there is usually some logical thing to do next, or I can have characters bash around together until something happens. With poetry, I have to make it all happen. Though, I must say, the prompts help. And I do write random words or ideas down until something solidifies.

Also, in the past, I only wrote poems when inspired. I'd have a niggling in my brain, an urge to write something that wouldn't go away, so I'd write it all down and move on. With Napowrimo, I've been writing a poem every day, whether I feel like it or not.

And, today is only the 10th day! It's been a long road to write the nine poems that I've posted so far. It's been hard to post them. Again, with the novel writing, I write bad first drafts and I know it, I don't show them to anyone until I've edited for months. I feel raw and exposed posting these poems every day.

I would love to hear from others writing Napowrimo or taking on other writing challenges and hear how you are doing.