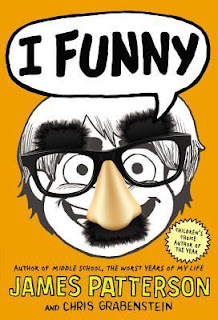 Book: I Funny: A Middle School Story by James Patterson and Chris Grabenstein, illustrated by Laura Park, 2012 by Little, Brown and Company, 320 pages.

Synopsis from Goodreads:
Jamie Grimm is a middle schooler on a mission: he wants to become the world's greatest standup comedian--even if he doesn't have a lot to laugh about these days. He's new in town and stuck living with his aunt, uncle, and their evil son Stevie, a bully who doesn't let Jamie's wheelchair stop him from messing with Jamie as much as possible. But Jamie doesn't let his situation get him down. He practices the craft of stand-up every day on friends, family, and the willing customers at his Uncle Frankie's diner. When Uncle Frankie mentions a contest called The Planet's Funniest Kid Comic, Jamie knows he has to enter. But are the judges only rewarding him out of pity because of his wheelchair, like Stevie suggests? Will Jamie ever share the secret of his troubled past instead of hiding behind his comedy act?

Following the bestselling success of the hilarious Middle School, The Worst Years of My Life, James Patterson continues to dish out the funnies in another highly-illustrated, heartfelt middle school story.

My Thoughts:
I am honestly torn about this book. I was so excited to receive it and read it to my kids - and I have to say that I did read it to them and they enjoyed it.

However, I do have a couple of issues. First off, Jamie Grimm was adopted by his aunt and her family after his family was killed and he was left in a wheelchair. His adoptive family doesn't treat him very well, forcing him to live in the cold garage, not engaging with him, and his older cousin bullies him terribly. I get tired of horrible adoption stories in children's book. This is a personal pet peeve of mine, but everything from fairy tales to Harry Potter have bad adoption stories. I would so love to see a good adoption story in children's books so that kids could learn about healthy, normal adoption experiences. Really? Your whole family dies and you are in a wheelchair and you have to move cities and go to a new school and your aunt and uncle put you in the garage and let your cousin torture you? I ended up having some good discussions with my kids about this and what adoption really means.

The other issue was the humour - I got all of the jokes and comedy references and many of them were funny, but there were also a good number of them that went over my kids' heads (aged 7 and 10). They just didn't get them. There were enough jokes that they did get, though, so they thought the book was funny.

The story itself, otherwise, was fine: Jamie likes to tell jokes and his uncle (a different one, not his adoptive one) encourages him to enter a Funniest Kid Comic competition, which he does. Even though he is extremely nervous, he overcomes his fears. The story also focuses on Jamie's life at school and his adjustments to moving to a new community and trying to make new friends.

The illustrations in the book were fantastic and clever. Laura Park did a great job. If you study them, you see quirky little details, like the bumper sticker on Jamie's wheelchair changing.

Overall, I think kids will enjoy this book. The humour, short chapters, and fun illustrations will have them turning the pages, and the message of following your dreams even when it's not in your comfort zone is a good one.

Disclaimer: I received an ARC of this book from the publisher in a contest.
Posted by Unknown at 06:10